From scythes and grazing sheep to robotic mowers powered by Alexa and Google, lawn mowers have come a long way.

Historically, the first lawns were grass fields surrounding English and French castles, which had to be clear of trees so enemies could not sneak up on the castle through the forest. Without trees, grasses sprouted up naturally in the clearing, thus lawns were born. The word lawn comes from the English word “launde” which meant a “glade or opening in the woods” or a common area in a village where farmers grazed livestock. Back in the day, as sheep, cows and horses mowed the lawn, they also left behind fertilizer ensuring the need for more mowing.

Formal, well-maintained lawns first appeared in Europe in the 1700s, but methods to maintain them were labor-intensive and inefficient, using grazing animals or scythes, sickles and shears to hand cut the grass. Even skilled scythe handlers left swirls or sear marks on the grass, because the scythe was swung in a half circle, and the blade was often serrated.

It took over 100 years until the first mechanical lawn mower was invented and patented by engineer Edwin Beard Budding of Gloucestershire, England, in 1830. Budding got the idea after seeing a machine in a local cloth mill. The machine used a cutting cylinder with a bladed reel to trim the irregular nap from the surface of woolen and velvet cloth in order to give it a smooth finish.

Budding saw the potential for using this same technology to cut grass, so he developed a reel-type mower that used a series of blades arranged around a cylinder. Budding’s design was an early forerunner of the modern reel mower measuring 19″ wide made from wrought iron with cast iron gear wheels. This made it quite heavy and difficult to push compared to modern reel mowers. As the mower became more popular, it became obvious that an extra handle should be introduced at the front to help pull the machine along. In the image you can see the wooden T-shaped handle that could pivot forward and in front of the mower to pull it when needed. In 1832, Budding and his partner, John Ferrabee, sold over 1,000 mowers, manufacturing them at Phoenix Iron Works in Thrupp, just outside of Stroud. The pair also licensed other companies to build copies of their mower, but the most popular line was JR & A Ransome of Ipswich.

The lawn mower proved so popular that other inventors and companies worked to develop the idea further. However, Budding’s basic design is so good that very little development has actually taken place on the human-powered lawn mower, and his design is still in use today with modern reel mowers. An early cylinder (reel) mower from 1888, showing a fixed cutting blade in front of the rear roller and wheel-driven rotary blades. Budding’s lawnmower design was an early forerunner of the reel mower and the classic design is still around today.
Source: Garden and Forest, February 29, 1888 issue
https://commons.wikimedia.org/wiki/File:ReelMower.png

It took about 10 years after the lawn mower was first sold, however, to create one that could be hitched to animals. In 1842, Scotsman Alexander Shanks invented a 27-inch pony-drawn reel mower. To avoid the hooves leaving indentations in the lawn, soft brown leather shoes were wrapped around the horse’s feet. A push lawn mower with front lever connected to a horse. The horse would help pull the lawn mower as the lawn mower operator pushed and guided it from behind. Often, horses were outfitted with soft leather boots to protect delicate grasses from damage.
Source: How Does Your Garden Mow, History of the Lawn Mower
https://howdoesyourgardenmow.com/history-of-the-lawn-mower/

In 1859, Thomas Green was responsible for creating the first chain-driven mower. This was a big deal because a chain drive meant a lighter machine, further reducing the amount of effort it took to cut your lawn. Green’s first machine was called the Silens Messor (silent running); and though the design would change over the years, the principles it was based upon remained the foundation for Thomas Green’s business until production ended in 1935.

The first United States patent for a simple reel mower was granted to Amariah Hills of Connecticut in 1868. Just two years later in 1870, Elwood McGuire, a Richmond, Indiana native, designed a push mower for the masses. The lighter, simpler machine was a huge hit. Almost thirty years later in 1899, American John Albert Burr patented a mower with better rotary blades and traction wheels.

Steam-powered lawn mowers appeared in the 1890s, but in 1902 Ransomes produced the first commercial lawn mower powered by an internal combustion gas engine. Ransomes was the first company to power a ride-on mower using a gas engine. The machine signaled the start of commercial mower production in the United Kingdom. Although Ransomes Jacobsen, as the company is now called, no longer produces domestic lawnmowers, it remains a leading commercial mower manufacturer, supplying equipment to local authorities, golf courses, landscape contractors, and stadiums around the world. 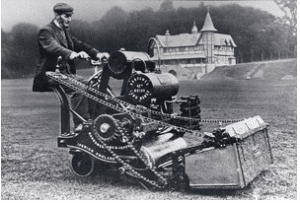 In 1902 Ransomes was the first company to power a ride-on mower using a gas engine; one of the first was sold to Cadburys to maintain their Bournville, England sports ground. The mower weighed 1 ¼-ton and was eight-feet long. Source: https://www.eigca.org/Articles/22701/A-History-of-Mowing-as-reflected-by-Ransomes-Jacobsen

In the U.S., gas-powered mowers were first manufactured in 1915 by Ideal Power Lawn Mower Co. of Lansing, Michigan, based on a patent by Ransom Eli Olds. Olds was also a pioneer of the assembly line and auto industry, after whom Oldsmobile and REO brands were named. Ideal Power Lawn Mower Company also introduced the world’s first self-propelled riding lawn tractor in 1922, known as the “Triplex”. Ideal was later acquired in 1945 by the Indian Motorcycle Company.

In 1919, Colonel Edwin George also invented and manufactured a gas-powered lawn mower in the U.S.  However, due to the Depression and WWII, the mowers didn’t receive mainstream success until later. After World War II, they were more popular, helping create the middle-class vogue for manicured lawns.

In the 1920s one of the most successful companies was British Atco (Atlas Chain Company), at that time a brand name of Charles H Pugh Ltd. The first mass-produced mower became a huge success with just 900 of the 22-inch-cut machines manufactured in 1921. Within five years, annual production had accelerated to tens of thousands. Prices were reduced and a range of sizes was available, making the Standard the first truly mass-produced engine-powered mower. Toro produced an affordable, easy-to-use mower for homeowners that could be easily stored in the garage. The Toro Motor Company was founded in 1914 to build engines for The Bull Tractor Company, thus the name Toro was chosen because of the association with Bull. In 1948, they entered the rotary lawn mower business transforming the market with an enclosed deck design, later becoming a leader in the push mower market.

Powering many of these mowers was Briggs & Stratton, a company well known for providing power for agricultural and military equipment by the 1920s. In 1953, Briggs & Stratton revolutionized the lawn and garden industry by developing the first lightweight aluminum engine. Toro produced an affordable, easy-to-use mower for homeowners that could be easily stored in the garage.
Source: Toro Company History
https://www.thetorocompany.com/company-history

The Zero-Turn Mower hits the Market

The first commercially available zero-turn mower was invented by Max Booth Swisher of Warrensburg, Missouri and manufactured in 1955. Called the “Ride King,” it used the front wheel as the drive wheel that was also able to turn 360 degrees. The wheel was driven by the motor in the same direction and, in order to reverse or utilize the zero-turn radius capabilities, you turned the steering wheel 180 degrees and the mower would move in reverse. In 1963, a Hesston Corporation employee named John Reiger patented full zero-turn radius technology. Hesston, an ag equipment manufacturer, had recently engineered the swather, which was propelled by belts to cut hay that was then laid out in windrows. The counter-rotation idea inspired Regier to use the same technology in a zero-turn mower and patented the design. He sold the patent to Hesston who, in 1964, became the next company to offer mowers with zero-turn technology. Hesston eventually became Excel Industries, the parent company of Hustler Turf Equipment, makers of the “Hustler” and BigDog Mowers. Today there are well over 300 models of zero-turn mowers from over 14 manufacturers. You can read more about those here. If you’re in the market for a mower, you can buy an online appraisal of most of today’s popular used mowers at IronAppraiser.com, which is like the blue book of lawn mower values. Or if you’re window shopping, have a look at the extensive selection of zero-turn mowers on IronSearch.com.

The first self-propelled lawn mower was patented by S Lawrence Bellinger in 1969 under Mowbot, Inc and featured automated or remote control operation, propelled by a battery. These first robotic mowers followed a border wire around the lawn with specialized sensors that automatically mowed around obstacles and return to their “home” docking station when it started to rain.

It would be 25 years before the robotic mower industry moved to the next level in the U.S., when Husqvarna launched the Solar Mower in 1995, the world’s first fully robotic lawnmower. With solar energy only, this had power enough to support both the wheels and the cutting system.

In 1998, Husqvarna introduced the completely automatic robotic mower AutoMower®. In order to enable continuous mowing 24/7 and without regards to weather conditions, the AutoMower®  was equipped with a rechargeable battery. In 2012, the Bosch Indego introduced lawn mapping, to mow in a systematic manner instead of a random pattern. Bosch and Husqvarna’s newest models are both enabled for voice control, using Amazon Alexa or Google Home.

Most recently, robotic mowers, without perimeter wire are on the market. Toadi’s self-driving lawn robot uses a camera to autonomously drive around the yard, and night-vision enables the robot to function at night. Promoted as “she,” Toadi discovers what your yard looks like and creates a map of it, and is able to avoid obstacles – all without perimeter wire. She will be available in April 2021. Get More articles and insights like this one, in your inbox, every month.

Sign up for our newsletter, tailored for the Ag professional.